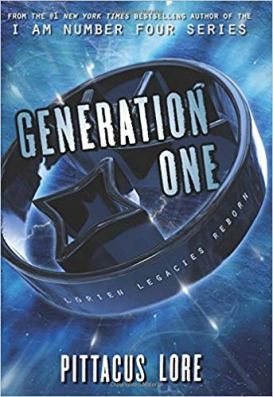 The war may be over—but for the next generation, the battle has just begun!

It has been over a year since the invasion of Earth was thwarted in Pittacus Lore’s United as One. But in order to win, our alien allies known as the Garde unleashed their Loric energy that spread throughout the globe. Now human teenagers have begun to develop incredible powers of their own, known as Legacies.

To help these incredible and potentially dangerous individuals—and put the world at ease—the Garde have created an academy where they can train this new generation to control their powers and hopefully one day help mankind. But not everyone thinks that’s the best use of their talents. And the teens may need to use their Legacies sooner than they ever imagined.

Pittacus Lore sure knows how to poop out books. And I am so glad for that. Lorien Legacies (also known as the I Am Number Four series) was really good and contained a lot of side stories in addition to the 7 original books. The ending of United as One (#7) was good and open. It could have ended there, but it was great that he decided to continue. Generation One takes place more than a year after United as One and focuses around the new Garde. I thought I would miss the original Lorien Garde, but I didn’t. The characters were all different and vivid and you connected with each of them.

It was easily written, making it an easy but very enjoyable read. The story was good and didn’t feel too spaced out and it didn’t leave any loose ends (except that the ending was a huge cliffhanger obviously).

It was very similar to the other series and if you enjoyed that one, you will enjoy this too! And no worries, the original Garde is in it a little too. It gets a 4 from me.