I can’t remember the last time I was this tired. But being tired on vacation is basically just a receipt that you are doing the vacation right. Max gear all the time!

This morning was similar to yesterday. We discussed work-related things that we will work on and improve next year and there were good points made.

The afternoon was all dedicated to baths. We (or some of us, not everyone wanted to go to the thermal baths) walked to Szechenyi Bath and had lunch before at a restaurant close by. The food was simple and good. Pasta with tomato sauce.

We were 6 girls walking together to the bath when we saw a pretty castle and a market outside, so obviously we had to stop there. I was too full from the lunch so I didn’t get one of those sweet bread tubes, but I tried and it is on my agenda tomorrow to buy one for myself. We all also bought paprika powder. Apparently you should, so we did. I got one sweet bag and one spicy bag.

The bath was a really cool place! It was like a block of a low building, enclosing pools. One of them was really warm and it was perfect with the fall weather of November. There was a pool for laps and also a pool with a strong current. That was fun! But some people were so disrespectful and bumped into people all the time, both unconsciously but also consciously. Not okay!

Inside there were many smaller pools, hot ones and cold ones. Also several saunas. I tried most of the stuff but would have liked to be in the eucalyptus steam sauna a bit more. My dad’s genes are really 110% present at moments like this. I love heat! I love to sit in saunas or hot water. Not everyone is like that, which is good, but a little more sauna would have been nice. Our main playrule for the weekend was “everyone included/leave no one behind” and it worked. 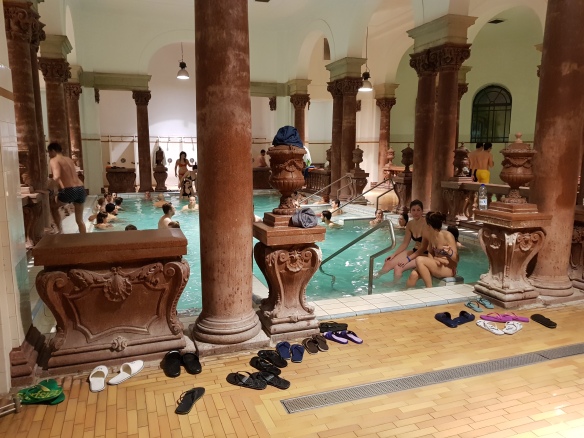 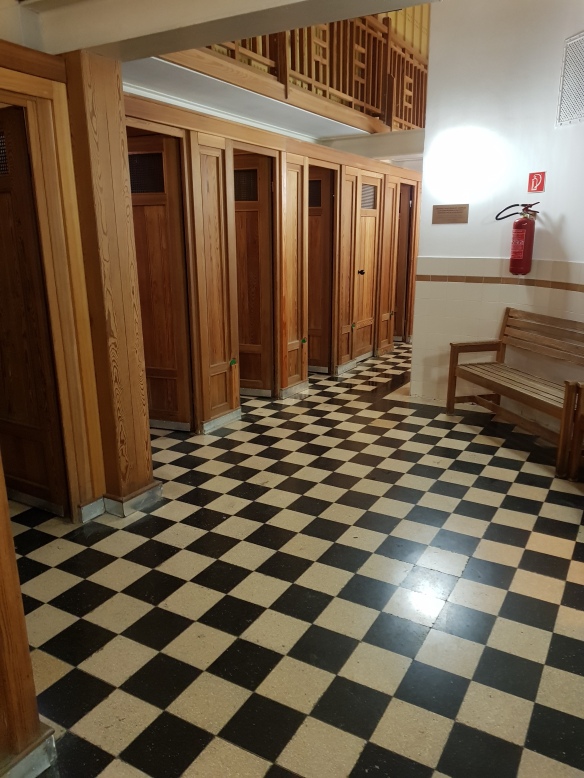 The changing rooms were special. Small boths that you entered from the outside, and pulled down a part of the seat to lock the both doors on the side. When you are done, you open the other door and go to the baths. So strange. It took me a while to figure out how to lock the doors, haha!

We were three girls left at the bath at 5pm and we then took a bus back to the hotel. Less than 30 min later, I was down in the lobby leaving for the restaurant.

It was called Duncorso and we were served a three course dinner with Hungarian specialties. It was good! The company was also good and our table of six decided to toast every five minutes and each of us to speak every time. I used that moment to thank everyone for the warm welcome I have got and that I look forward to working .ore with everyone. I stumbled on words and it was not good at all, but I think the message went out okay. 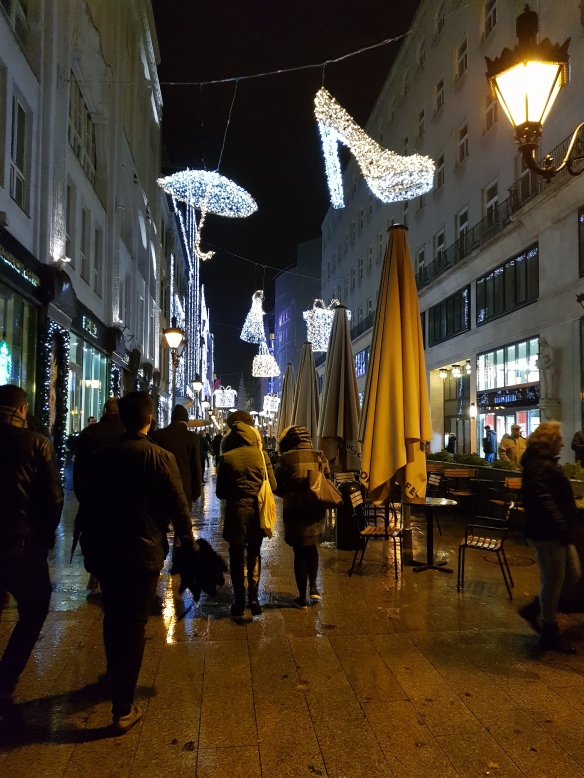 I am truly happy at working at WSP. It is great. Fun work tasks and great coworkers. It couldn’t have been better!

After dinner we walked to a ruin bar, Szimpla Kert, the most famous one. It was the craziest bar ever! After WWII, there were a lot of abandoned buildings and eventually people put stuff in there and started up bars (or something like that). Everything in there was random and inside the building were several bars with different focus. The coziest room was the old tech junkyard with old screens and lights intertwined. Or the top floor where there was a hole in the floor. It is hard to describe. So I will post pictures when I get home. Probably not tomorrow. But Tuesday?

I talked to Dad today as well. Apparently, he heard from Grandma, who read my blog, that I was here now and gave me tips on a few things. I might look into them tomorrow. What is also pretty sick, is that he was here just last week, Sunday to Wednesday, and lived very close to where we are staying. And on Sunday, he was at the Szimpla Kert bar exactly (probably on the clock) a week before me. Crazy!! 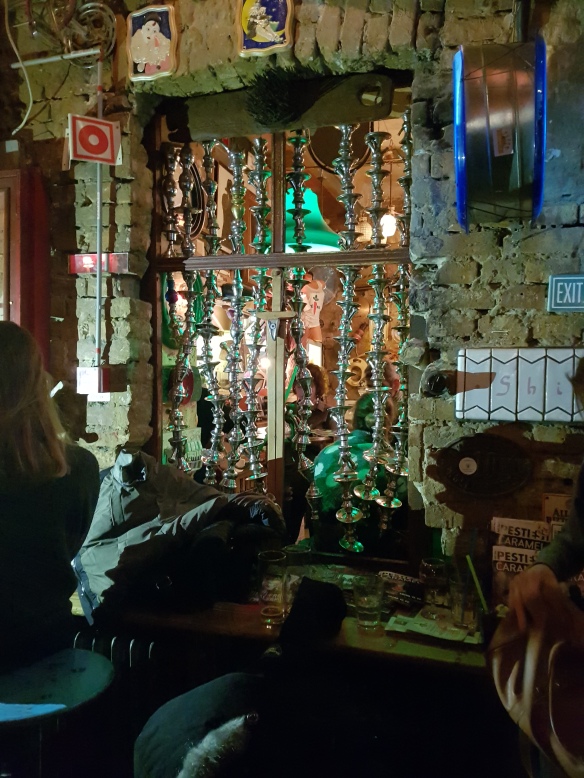 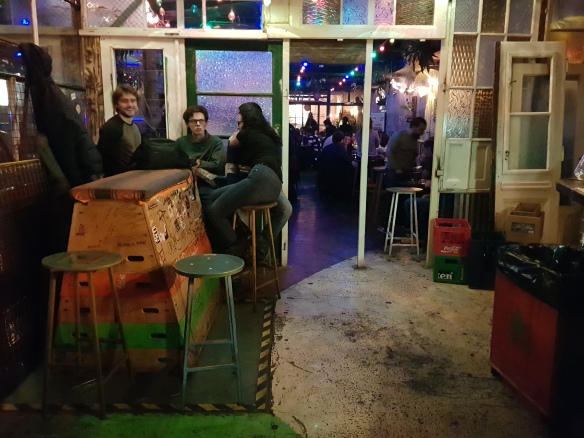 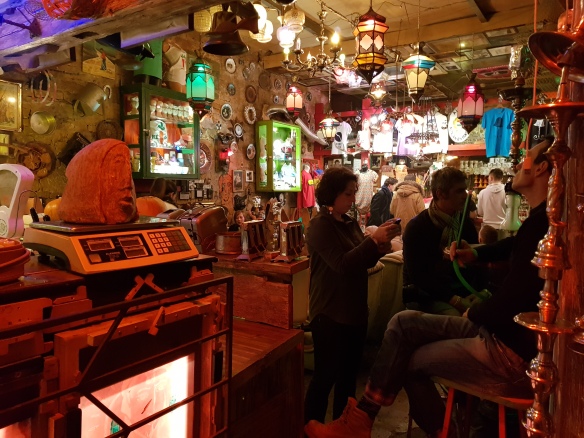 One last day (half day) left in Budapest tomorrow. Only free time. I have to think about what I want to do. Probably shopping. And it would be cool to go on Metro 1, which is considered the oldest (or second oldest depending on how you count) subway in Europe.

Super long day, my calves are so stiff. Maybe I will book a massage here tomorrow instead, haha!