Oh my goodness. What a weekend! I’ve learned so much stuff that I can’t really think straight right now. I’ve talked to publishers, editors and authors and learned exacty what I needed to learn. The planning of a book and the writing itself, I have under total control, but what happens after? Who are all the different people helping with the script? If I get a publisher, all works out with the help of the publisher. But if I do this whole thing by myself, I now know who to contact about what parts I need help with. And that is such a reassurance and relief and a huge motivator. I want to be done with the script so I can start exploring that part of writing a book as well.

Yesterday I did some calculations, and if I write 500 words per day, I will reach my 100k goal by New Year’s. Wouldn’t that be awesome? To have the first draft done in three months? It would be unreal.

The Book Fair is not about just writing, it’s also about reading and I bought some books. Six to be exact. And four of them are signed, that’s not too bad! I had Dmitry Gluchovsky sign Metro 2033 and 2034. 2035 had sold out. But I already had that one at home, but in hard cover. My square brain likes order and having two paperbacks and one hardcover just wont feel right. I might buy the last one in paperback and sell the hardcover so it looks unified in my bookshelf.

The other two signed books are Hjärnstark and Skärmhjärna by Anders Hansen. He is a psychologist and I’ve heard a lot about the first book and I couldn’t say no to a signed copy after listening to him talk to a moderator at the fair. I’m not super interested in celebrities, but authors who have accomplished something (that I now can relate to) is different. I get really starstruck when meeting authors and talking to them. I talked a little with Dmitry yesterday, but I had no idea what to say so I just babbled and probably sounded like an idiot. But he is a really fun guy! I heard him talk today at a seminar with Un-Su Kim, a korean author. They discussed how the written word is affected by other media today. Very very interesting seminar. And funny!

The last two books I bought was Fire & Blood by George R. R. Martin and a cookbook with mug cakes. I’ve been meaning to get it for a while now and it was there, so why not. Recipes for mug cakes can be nice. Quick dinners or snacks. I was looking at a cookbok with Korean BBQ recipes. But I didn’t get it. Maybe I should have?

It was a very fun weekend. I am so full of energy right now. So much motivation and inspiration! This was exactly what I needed right now when the dark fall is just around the corner. 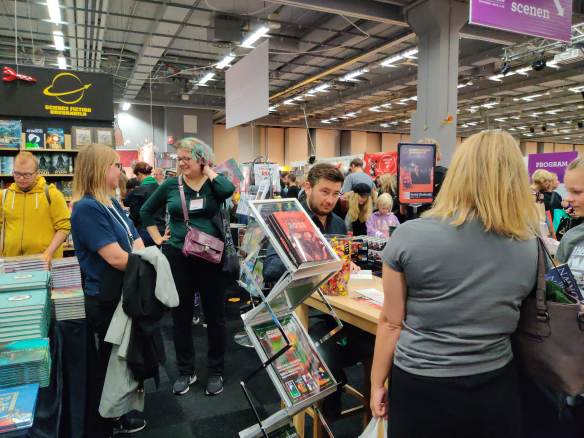 Un-Su Kim and Dmitry Gluchovsky discussing the impact of visual media on the written word.