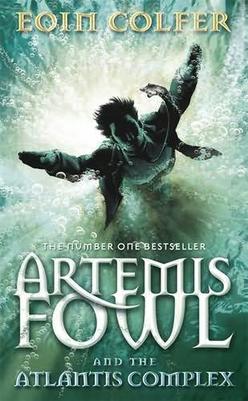 Young Artemis has frequently used high-tech fairy magic to mastermind the most devious criminal activity of the new century. Now, at a conference in Iceland, Artemis has gathered the fairies to present his latest idea to save the world from global warming.

But Artemis is behaving strangely – he seems different. Something terrible has happened to him . . . Artemis Fowl has become nice.

The fairies diagnose Atlantis Complex (that’s obsessive compulsive disorder to you and I) – it seems dabbling in magic has damaged Artemis’ main weapon: his mind. Fairy ally Captain Holly Short doesn’t know what to do. The subterranean volcanoes are under attack from vicious robots and Artemis cannot fight them. Can Holly get the real Artemis back before the robot probes destroy every human and life form?

It’s been a while since I read The Time Paradox and I don’t think I misremember when I think back on the five previous books as really good ones. But while reading this, pretty early on, I felt that this was not in the same class as the rest of the series.

I love everything that has to do with underwater environments so The Atlantis Complex has always been a book in this series that I looked forward to. But, small spoiler alert, it doesn’t have much to do with Atlantis. And it didn’t really feel like the typical Artemis Fowl book where Artemis had a goal, a heist to complete, but rather circle around events that doesn’t really impact the rest of the story (the last book in this series).

In other words, it kind of felt a little bit uneccessary for the whole Artemis Fowl story. But what do I know? It might be of importance that Artemis developed an OCD-like complex in this installation.

Still entertaining, but I have higher hopes for The Last Guardian. It gets 3 out of 5.