This has been such a long day. Traveling with the timezones is the worst. Especially since it is almost impossible to sleep on the airplane. I have basically been awake sinve 4am on Sunday (it is now 1pm Monday in Sweden, 9pm here in South Korea).

We had a layover in Paris, had breakfast and took off 4 hours later. The flight to Seoul was 10h, but went by surprisingly fast. I watched two movies, read a lot and tried to sleep, not sure if I was successful or not.

8am, local time, we arrived and everything went really smoothly since then. Koreans generally don’t speak English very well, so I guess that’s why all their signs are translated to English? It is very easy to know where to go, just follow the signs, which are also better than pretty much anywhere I have ever been.

We took a bus from the airport to the hotel, or actually it is a hostel, Starria Hostel. But mom and I have our own room, our own bathroom and they serve breakfast, so it doesn’t really feel like a hostel. Oh, the bathroom… It is like they put a shower in the room inside glass walls and installed a sink and a toilet inside it. I haven’t tried it yet, but it feels like a very bad solution. Everything will be wet!

Today was all about coming here, no plans, just doing what we felt like. While waiting for check-in at 2pm, we walked around in Myeong-Dong, a big shopping district right where we are staying. So loud, so many people, even on a normal Monday. I have had a constant headache today, probably because of lack of sleep, so all the noises were more annoying than interesting. We had lunch and we learned that this country is not cheap. But good food though! We have a long list of recommendations from back home.

Once we checked in, we decided to take a nap, 2 hours of sleep was heavenly before meeting up with my brother. We took a taxi to where he is living, in Sichon, where we had Korean BBQ. 1kg of pork, barbecued right on our table. No carbs (which Felix told us Koreans barely eat, I guess they do LCHF), kimchi and other salads on the side. Small portions of it put inside a lettuce leaf called Ssam. They are only available here in Korea, no export because the Koreans need them all for this wrap-dish. One-bite-sized to not spill. Apparently it is very romantic to prepare on of these and give to your partner.

Felix also showed us what to drink with this. Somaek (abbreviation of Soju and maekju) is a shot of Soju, a traditional Korean clean alcoholic beverage that kind of reminds me of a weaker type of Vodka, made of rice, and beer. I tried it, and it wasn’t as bad as beer itself, but I was way too tired and had too much headache to drink the whole thing.

He told us many interesting things, like for example that 98% of everyone in Seoul are Koreans (no wonder I felt really out of place, we barely saw any other people today). The rest I think I alraedy forgot. I am tired :). Even with a hard bed, I think I will sleep like a rock tonight.

I think we might not have been allowed to fly over North Korea.

Myeong-Dong cathedral. Did you know that South Korea is a mostly Christian country?

This is probably the prettiest tree I will ever see in my whole life! 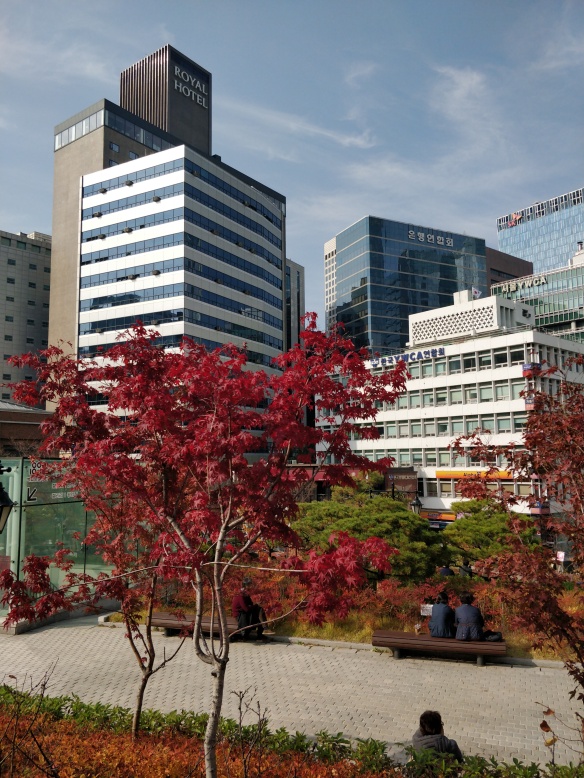 Fall is really here and I can’t wait to go to parks and see more of these beautiful colors.

The street we live on. RIght above the Namsan park and N Seoul Tower.

The shower with installed toilet and sink. 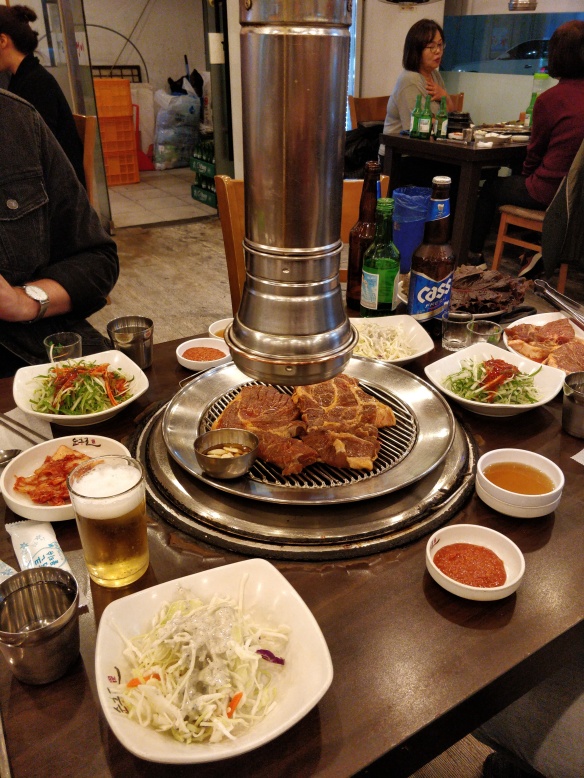 I honestly want to see what this looks like during rush hour. I will most likely hate myself if I ever go and see it. 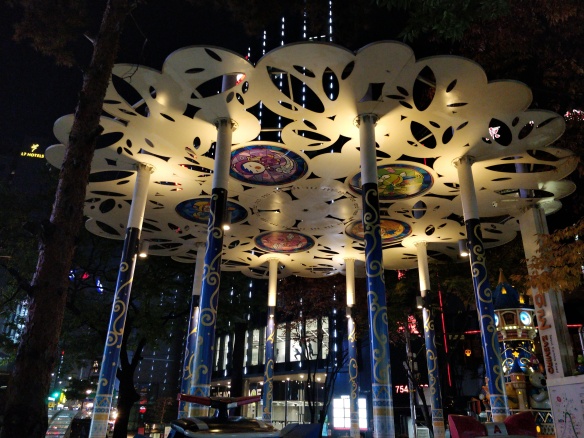