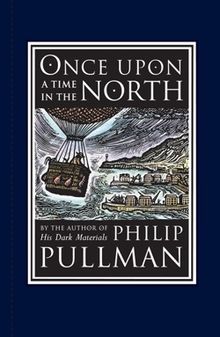 Title: Once Upon a Time in the North
Author: Philip Pullman
Series: His Dark Materials #0.5
Genre: Fantasy
Pages: 104
Published: 2008, Alfred A. Knopf
My Grade: 4 out of 5 arctic rabbits

In this prequel episode from Philip Pullman’s His Dark Materials universe, Lee Scoresby — Texan aeronaut and future friend to Lyra Belacqua — is 24 years old. The story reveals the origins of Scoresby’s friendship with Iorek Byrnison as well as Scoresby’s aeronautical career.

After winning his hot-air balloon in a poker game, Scoresby finds himself floating north. On the Arctic island of Novy Odense, Scoresby and his dæmon Hester become involved in a deadly plot involving an oil magnate, a corrupt mayoral candidate, and a hired killer who is Lee’s longtime nemesis from the Dakota Country. Forming an alliance with one of the island’s reviled armored bears, Scoresby fights to break up the conspiracy.

When I read His Dark Materials, Once Upon a Time in the North had just gotten out and I hadn’t gotten my hands on it. Then I continued to not have it and therefore not read it. Until now. And I feel more than ever that I really have to reread the original series. I can’t even remember who Lee Scoresby is and what his role is. The bear, Iorek, I do remember bits and pieces of, but no big details.

It was a short story, very enjoyable. But it might have been more enjoyable if I didn’t read it “before” the original series. Hard to remember after 10 years. But it gets a 4. Maybe I will give it a higher grade after I finish rereading His Dark Materials.